One of the great things about hiking the Kumano Kodo is that you will stay in a range of traditional local accommodation and really immerse yourself into the Japanese cultural experience. It is quite unlike staying anywhere else in the world as you'll really feel you're in Japan when sleeping on a tatami mat on the floor in a room with shoji paper room dividers.

On the Kumano Kodo you will stay in either ryokans or minshukus, traditional Japanese style inns that are generally quite basic in style but have great character and friendly hosts.

A Ryokan is a type of traditional Japanese inn that originated in the Edo Period (1603–1868), when such inns served travellers along Japan's highways linking the major towns and cities. They typically feature tatami matted rooms, communal onsens (hot spring baths), and other public areas where visitors may wear a cotton yukata robe on the premises.

A typical ryokan has an entrance hall, with couches and chairs where guests can sit and talk. Guest rooms are constructed using traditional Japanese methods: flooring is tatami, and doors are sliding doors. Even if the inn uses hinged doors for security, it usually opens into a small entrance way where guests must take off their shoes before stepping onto the tatami floor, which would be separated by a sliding door.

Minshuku are smaller versions of ryokans, roughly equivalent to a bed and breakfast and usually consists of fewer rooms than ryokans. Minshuku often serve as the only type of accommodation available in smaller towns or villages. The overall experience is much the same as a ryokan. Minshukus are often family run and have got a great friendly atmosphere.

Majority of traditional Japanese style inns will have shared toilet and bathroom facilities.

In both ryokan and minshuku it is an inviolable rule that you remove slippers/ shoes before stepping into your rooms. Outdoor shoes are usually left downstairs in the entrance hall and there are baskets provided to put them in. Similarly, you should leave umbrellas and hiking poles there as well, though remember to collect them before you leave! Please see our page on bathroom etiquette  for details on onsen baths.

On Mt Koyasan you have the unique opportunity to stay in a Buddhist temple, some of which have a history of over 1,000 years.  It is a great chance to experience the serenity and daily rituals that accompany life in a Japanese Buddhist temple. You'll be expected to eat the vegetarian cuisine that is served here and there is an opportunity to attend the early morning fire ceremony that takes place in some temples.

These are most commonly encountered in the larger towns such as Kii-Tanabe, Kii-Katsuura and Shingu and big cities like Osaka, Kyoto and Tokyo where they form the majority of accommodation options.

Hotels generally provide western style rooms with beds and ensuite bathrooms. Please note that hotel rooms in Japan are often smaller than what you may have found in other countries. In smaller towns, hotel standards may not be quite as high as in major centres. It is also worthwhile noting that smoking in hotel rooms is not unusual or culturally frowned upon in Japan so even when booking non-smoking rooms previous clients may have chosen to smoke in the room and thus on occasion there may be a slight aroma of smoke in your room or other areas of the hotel.

One of the great delights of staying in Japan are the onsens, communal baths where you can soak and relax after a hard day's hiking. Almost all accommodations will offer some sort of an onsen - they may range from a grand outdoor onsen through to a small indoor one or just a simple bath.  There are strict rules of bathing etiquette which must be followed by all visitors - for more details refer to this page. 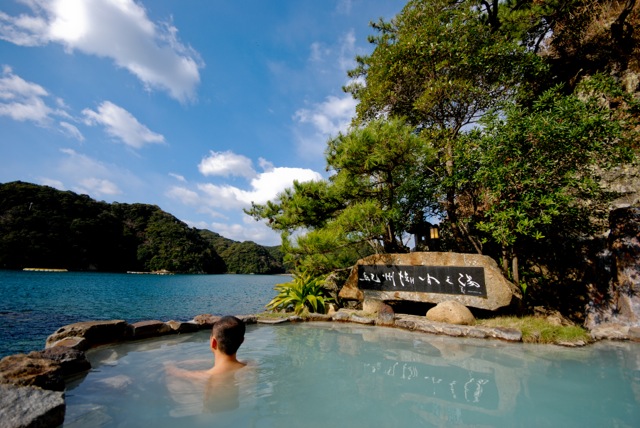 Nakanoshima Outdoor bath on the coast

If you are booking an organised trip with RAW Travel then we organise daily luggage transfers for your luggage on the Nakahechi route. This means you only need to carry a daypack and your main luggage will be transferred from your accommodation to the next.